Lucile attended the First World Conference on Women in Mexico City in 1975 as a representative of the International Association for Religious Freedom (IARF). She committed herself to communicating about it when she returned. It was an important turning point for her. This page tells the story.

Lucile attended this first UN Conference on Women as the official delegate for the International Association for Religious Freedom. Here is the statement created for that conference:

COPENHAGEN UN CONFERENCE ON WOMEN IN 1980

A delegation of UU Women attended this Second World Conference on Women.

Lucile will always be the willing ally for those who continue to unravel the tangle that has come to be called religion, and together reweave another tapestry that is truly eco-feminist. 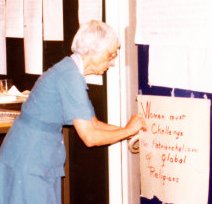 In Copenhagen, at the Second United Nations World Conference on Women, 1980,  Lucile writes:

“Women must challenge the patriarchalism of global religions.” 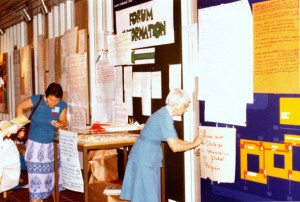 A delegation of UU Women attended this conference.

Pictures from 1980 UN Conf on Women in Copenhagen

Patriarchy on a Global Scale