The Women and Religion Resolution birthed many new beginnings in the Unitarian Universalist Association. The slideshows and the text of this Resolution below introduce this groundbreaking effort and its results. Key to the resolution is the assertion that women  are often “overlooked and  undervalued women”  and that cultural and religious myths contributed to this situation.

This Business Resolution was adopted unanimously by the General Assembly in 1977.

Key Sections of the Resolution 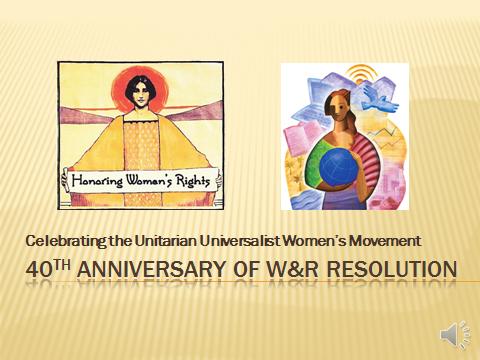 WHEREAS, a principle of the Unitarian Universalist Association is to “affirm, defend, and promote the supreme worth and dignity of every human personality, and the use of the democratic method in human relationships”; and

WHEREAS, great strides have been taken to affirm this principle within our denomination; and

WHEREAS, some models of human relationships arising from religious myths, historical materials, and other teachings still create and perpetuate attitudes that cause women everywhere to be overlooked and undervalued; and

WHEREAS, children, youth and adults internalize and act on these cultural models, thereby tending to limit their sense of self-worth and dignity;

BE IT FURTHER RESOLVED: That the General Assembly urges the President of the Unitarian Universalist Association to send copies of this resolution to other denominations examining sexism inherent in religious literature and institutions and to the International Association of Liberal Religious Women and the IARF; and

BE IT FURTHER RESOLVED: That the General Assembly requests the Unitarian Universalist Association to: (a) join with those who are encouraging others in the society to examine the relationship between religious and cultural attitudes toward women, and (b) to send a representative and resource materials to associations appropriate to furthering the above goals; and

BE IT FURTHER RESOLVED: That the General Assembly requests the President of the UUA to report annually on progress in implementing this resolution.

UUA page with the Resolution

To Make a Significant Difference